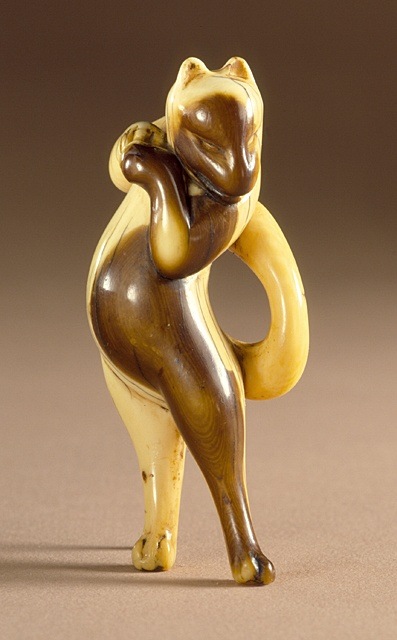 Common imagination has invested the fox, just like any other animal connected to female wisdom, such as the serpent and the owl, with negative qualities.

The fox is often held to be “cunning”, malicious, and associated with Woman as a sexually promiscuous temptress, whereas the fox often figures as a trickster in shaman literature and folklore, or else as a spirit or semi-divine creature poking fun at humans, upsetting their lives, teasing them with jests and petty annoyance.

The fact, however, that all these negative qualities, last but not least the Christian association of the fox with the devil, are deeply stratified within patriarchal culture, should make us reflect.

The ancient chamaleonic and transforming powers of the fox, as well as her capacity to deconstruct deadpan and seemingly inextricable situations, figure amongst the gifts that she may bestow upon the women of today.

The playful figure of the fox can be associated with the “Jesting women” present in ancient Italic culture, and attested by popular tradition, women that would destabilize mortuaries and funerals, and thus restore balance within the community.

Many cultures consider the fox to be a powerful messenger of invisible worlds, sharing the power of Shaman women to live in both the material and the spiritual world.

This seminar employs drumming and ritual art to invite the gifts of the fox into our lives. Women who wish to partake are invited to prepare certain manual creations, and timely adhesion is thus recommended, in order to allow careful preparation.

To participate, bring your drum or bell. The instrument should be your own, and not lent by anybody else.